There are ridiculous amounts of articles out there referring to the history of quilting.  I was going to write a super elegant one of my own as well, but in reality, that’s what Wikipedia, and your parents teaching you to “look it up” is for, right?  However, there are some really awesome points and projects that I think are awesome to share, regardless of how many times its been posted that the origin of the word quilt is the latin word Culcita, meaning a cushion or mattress that has been stuffed.

For those that know me, history is an awesome thing for me, so I’m focusing on some high level cool stuff from ancient history to share. For example, the oldest evidence of a quilted object is from Ancient Egypt, circa 3400BC.  There’s an ivory statue of a Pharoah (its not in the best of shape if you look at the Avril Colby book Quilting from the 30’s it is a pretty broken up statue, and that’s probably why I can’t find a picture of it on the Internet.) The statue is wearing a tunic that looks to be quilted in a diamond within a diamond pattern.  Pretty epic, right?

Lets Fast forward a little bit to the 1st Century BC, and move wayy north of Egypt, to the Scythians.  Found by Russian Archaeologists in the 1920s, a funeral cavern contained what is believed to be the oldest quilted object known in the world- a quilted funerary carpet.  Again, pictures of it are scarce, but thanks to a friend, I found some. 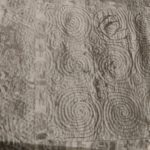 Seriously, those are spirals in the center, and fighting animals on the border picture.  While a lot of it is stuffed quilting, a la trapunto or cord quilting, its still gorgeous and over 2000 years old.

Forward to 1395.  For the 12th through 16th centuries, most of what we see in quilting, is in clothing for under armor pieces, there is this phenomenal piece held by the Victoria and Albert museum in London of the Tristan and Usolde story.  The work on this linen quilt is exceptional

Again, we go forward to one of my favorite centuries, the 18th.  While we still see most of the quilting of this period to be functional, we also start to see some embellishment being done to clothing by way of quilting. From about 1730-1770 quilting on petticoats and waistcoats seems to be especially popular, as evidenced from pieces in the Colonial Williamsburg collection.

As you can see, the detail in the quilting and the stitching of the period is quite exquisite, and shows the artistic nature of quilters, even during a utilitarian period.

The 18th century is the first extant examples of what we identify today as patchwork.  While these are paper pieced (which provides its own neat time capsule of writings of the period within it), and normally just attached to a linen backing as more of a coverlet, it does show our roots of patchwork and piecework that many of us have come to love today.

One such piece is also in the Collection of Colonial Williamsburg, and dates to about 1720.  Its pieced

From there we move forward to the 19th century, which is where most people start talking about the modern  brings us Applique in the form of the Baltimore Albums, and of course piecework during the Civil War by the Sanitation commissions and ladies societies.  We also see the advent of the sewing machine in 1840, which revolutionizes quilting and sewing as we know it today.

Then the 20th century, with cheap cottons, the Great Depression, and of course our eras of Make Do and Mend of the 2 World Wars.  All of these have been, and will continue to be talked at length about (even on this blog in the future!) So I will leave them as a passing note for future expounding upon.

I chose to focus on those older pieces because so few people talk about quilting as a needlecraft, sewing aspect, or hobby prior to the 19th century.  While the 18th century has gained some notoriety of recent note thanks to the Quilted clothing exhibit at Colonial Williamsburg, there was such little talk about ancient societal quilting, or even some of the beautiful display pieces, like the Tristan quilt. So there, Sewluminati, is your ancient quilting history lesson for today.

2 Replies to “A Cool Ass History of Quilting”